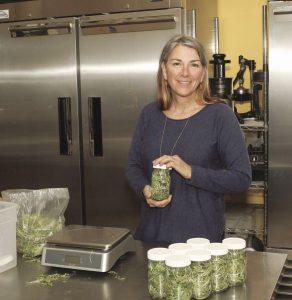 Brigid Rafferty and The Power of Juice are featured in the article along with other small businesses who produce locally sourced foods.

With the emphasis today on locally sourced foods, would-be entrepreneurs are drawn to the idea of making and selling their own food and drink products.

Thanks to state regulations, however, it’s not as easy as it sounds.

Entrepreneurs who wish to make it in Rhode Island’s cottage food industry have to meet various legal standards before they can sink their teeth into some profit.

Rhode Island essentially does not have cottage food laws because food to be sold cannot be prepared in one’s home; instead, it is legally required that the food be prepared in a state-approved and inspected commercial kitchen.

An exception is available for farmers, who may produce in a kitchen that is on the premises of a farm, so long as the kitchen meets certain standards such as a dishwasher that reaches 150 degrees Fahrenheit, according to Rhode Island General Laws Section 21-27-6.1, “Farm home food manufacture.”

Newport Cooks, a cooking school at 796 Aquidneck Ave. in Middletown, has a commercial kitchen that four food-based-business owners use to create their products, said Nola Ganem, founder of One World Cacao, LLC, and one of the kitchen’s users.

The kitchen has a suite of operating standards and there are regular inspections by the state Department of Health, Ganem said.

“They obviously are trying to protect the public,” said Mary Weaver, owner of Newport Cooks, speaking about the health department’s intensive rules and regulations.

To start a food business in Rhode Island, Weaver said, the aspiring entrepreneur needs to work with the health department to ensure the intended product meets certain standards for health and safety.

Aspects of the product like packaging and labeling are regulated, Weaver said. Certification and license fees also apply.

There are various licenses, and they stipulate various aspects of sale, such as where a product can be sold. Depending on the product, a sample from each batch needs to be sent to a laboratory for testing.

The legal process of incorporating a business in the state does indeed involve a gantlet of paperwork, but that process “helped me to clean up any little areas that needed to be,” Ganem said.

By trudging through the required processes to obtain legal status, Ganem learned “massively” about various aspects of food and food production, such as the fermentation process and safety regulations with canning, she said.

“In a way it kind of challenged me to level up,” she said. “I’ve learned how to open up and know my work and know my business.”

Throughout her legal journey, Ganem said the health department was helpful, enthusiastic and supportive.

Deja Hart, a partner of Newport Cooks effective Jan. 1 and founder of Rhed’s Hot Sauce, said the process of becoming legal in Rhode Island was intensive, but the California native said the laws were strict in that state, too.

“That’s the one piece a lot of people don’t realize going into it,” Hart said of the extensive process to have a product cleared for sale. In addition, “it’s not all written down somewhere,” Hart said.

It took Hart about a year to complete the required steps. She needs to send a sample of each batch of her hot sauces to Cornell University, a processing authority, for testing.

Another community kitchen for food-industry business owners is located in Tiverton.

“We’ve had a lot of success stories come out of Sandywoods,” said Sandra Dugan, property manager at Sandywoods Farm in Tiverton. An incubator kitchen is housed within the property at 43 Muse Way.

An incubator kitchen is intended to act as a start-up for entrepreneurs. “It makes the production so much faster and easier because we have everything you need,” Dugan said. At $20 an hour to rent space, the kitchen is “an inexpensive way to start up,” she said.

When starting a food business and deciding where to sell, the entrepreneur can apply for a retail or wholesale license, which is easy to secure from the health department so long as the business plan is together, Dugan said.

“If you’re diligent and you stick with it, it’s not a problem,” Dugan said.

Hope & Main, a culinary incubator in Warren, boasts a community kitchen that approximately 60 companies use, as well as educational resources and training, said Ali Montagnon, the nonprofit organization’s director of events.

Montagnon said the process of gaining legal clout to sell food in Rhode Island is indeed intensive, “especially depending on the nature of the product,” she said. Meat, for example, is a product that comes with a list of requirements that must be met.

Montagnon said there is one kitchen-user at Hope & Main who makes dog treats; when it comes to food for animal consumption, the laws are a bit looser, but the entrepreneur still opts to rent space at Hope & Main and utilize the organization’s resources, Montagnon said.

There’s a “professional aspect of things that people need, too,” that they might not have in a home kitchen, Montagnon said. 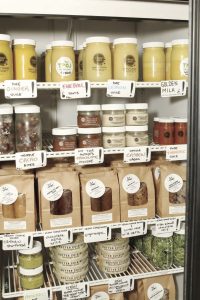 Brigid Rafferty, owner of The Power of Juice, an artisanal juice company on Aquidneck Avenue, incorporated her business in December 2014; she opened her current storefront in March 2017.

“They do not make themselves fountains of information or resources,” Rafferty said of the state Department of Health.

Rafferty has licenses to run a bottling business, a restaurant and a mobile food business so she can sell her products at farmers markets.

“It’s just a whole bunch of bureaucracy,” she said. “It should be a codified process.”

Entering the food industry, “the odds are stacked against you,” Rafferty said.

“There’s not a person in the cottage food industry that isn’t passionate,” she said. Passion is necessary because “there’s not a lot of money in it,” Rafferty said.

For example, if the owners of such businesses wish to sell their products in grocery stores, they are often financially strangled by wholesale distributors, who take a significant chunk of the profits, Rafferty said.

“There’s no provision for that,” she said. “All the big guys are getting the help.”

“(Gov. Gina) Raimondo says she’s all small business,” but Rafferty hasn’t seen any action, she said. “The state of Rhode Island, they say they want to encourage small business (but) no one’s coming to me saying ‘Yeah, there’s this great state-run program.’”

Private groups, instead, are driving the energy in the state, Rafferty said.

If there were no small businesses and only corporations, “the tapestries of our communities would change dramatically,” Rafferty said. Small business owners are “trying to return to some basic value.”